Publisher profile: Running a metered paywall and apps… together 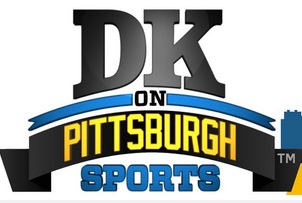 DKonPittsburghSports is a Pittsburgh sports news site run by the award winning journalist Dejan Kovacevic (DK). DK offers readers 2 free articles using a metered paywall. The paywall is integrated with his iOS and Android apps for centralized subscriber management. After a reader views 2 articles either on his website or in his apps, the reader is  prompted to pay for full access to his sports news and the right to post comments. DK has approximately 10,000 paying subscribers, and 10,000 app downloads.

What is a metered paywall? 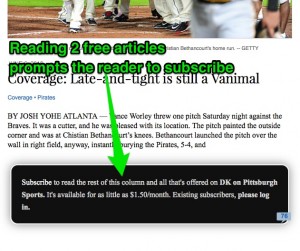 A metered or leaky paywall let’s X number of full articles be read for free during a Y time period. Once DK’s reader has read their 2 free articles, they are prompted to pay and subscribe. The idea is simple: try before you buy.

The alternative was to use a hard paywall which wouldn’t let fans read any articles unless they were a subscriber. One major drawback to using a hard paywall is that Google wouldn’t be able to discover DK’s articles since they would be locked away. Thus anyone searching Google for information about Pittsburgh sports would likely never find DK’s articles. The second drawback to a hard paywall is that since articles would be locked away it would prevent fans from sharing an article with their friends. Both these drawbacks would hurt DK’s ability to reach new readers. 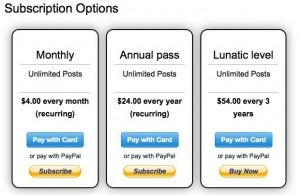 On the flip side, DK’s metered paywall leaks 2 full articles out for free and thus Google can (over time) discover all of his articles. Go search for Pittsburgh Steelers, Penguins or Pirates news and you will find lots of results from DK’s site. The metered approach also lets any one of DK’s articles go viral, which means it could be shared by millions of different readers as it gets passed around.

I like to use my wife Colleen as an example. She would visit our local news site here in New Hampshire to catch up on the news. Since they employed a metered paywall she could only read a limited amount of articles. After some time of “suffering” with the paywall she relented, subscribed and is much happier about it today.

DK finds that offering 2 free articles satisfies the casual reader. Beyond that, many Pittsburgh sports fans are willing to pay the $2 – 3 per month fee for access to his publication. His pricing levels are affordable and easily lets fans become part of the community. 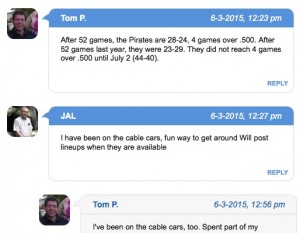 There is great debate about comments and many major publications have removed them for good reasons. But consider doing what DK does, let only paying subscribers comment on the site and in the apps. This has attracted more civilized commenting from his audience since paid subscribers feel a community belonging, and since subscribers are logged in with their profiles. DK (and other subscribers) know who a comment is coming from so the system in a way self-polices. Check out the comments for yourself. It works.

The iOS and Android apps 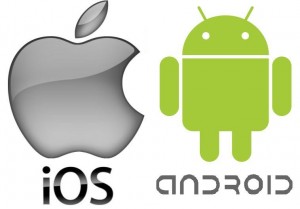 DK’s apps are a free download for anyone and offer the same number of free articles that is set in his metered paywall (currently 2).

And vice-verse… if a reader subscribes in the app, they can go to DK’s website and log in to gain full access rights on the web. 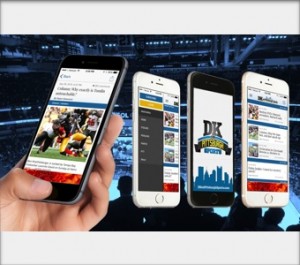 The apps makes the reader’s life easier since they can get to his articles quickly, anytime… by simply tapping the DK app icon on their phone or tablet.

The app platform also helps DK in a number of ways:

Fast workflow: the apps, through APIs, automatically publish what DK has published in WordPress. He has no extra work to do. Publish once in WordPress, he reaches readers on both the web and in his apps. 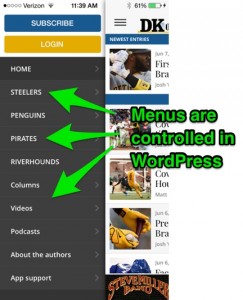 DK can also control his in-app menus from the WordPress dashboard. These menus contain content sections such as sports team news (Steelers, Pirates, etc), subscription info, promotional info, and anything else DK wants his readers to see. 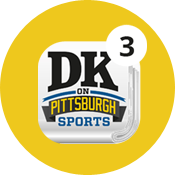 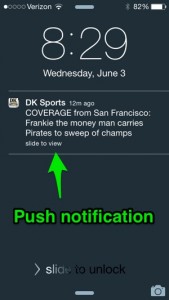 DK can also send push notifications using WordPress. He simply logs in to his site and creates a new push notification, anytime. He can also schedule future notifications… EG: 6am on Friday and know that when the time comes the notification will go out to everyone that has his app installed (free or paid). It is a powerful way to reach his audience. 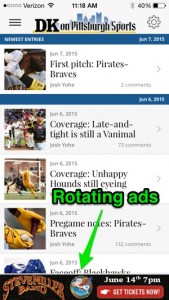 DK can also upload his ads from his WordPress site into his apps. Each additional ad he uploads simply rotates at the bottom of the app screen.

He charges more than enough for the ads to cover the cost of running his apps.

Does DK’s reader need to read his publication in an app?

This is a great question. Let’s look at some trends:

According to Nielson: 89% of media consumption is consumed on mobile apps

Only 11% of media is consumed on mobile web. Check out Neilson’s nifty chart: 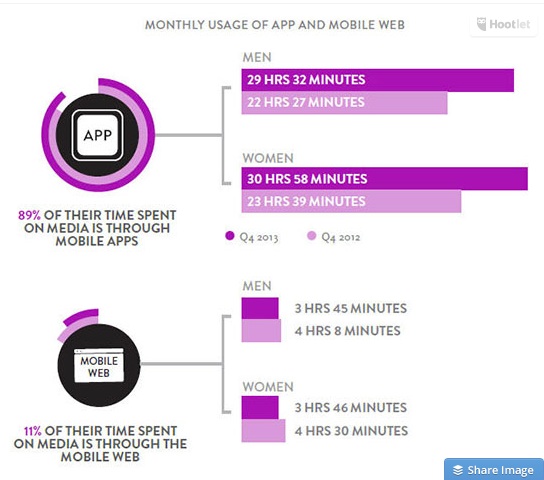 What do readers actually think?

We have some firsthand knowledge from subscribers. Check out these quotes taken right off the 88 comments on DK’s app announcement:

So glad to have this app. Make it a lot easier to read at work while on break

This beats the old way of accessing the site! Well done!

You just made my life a lil easier DK!

I’ve been pestering both my brother and father for months to sign up and as of yesterday I’m 1 for 2 with the second almost there (hoping the iPod app pushes him to sign up).

If you think about what subscribers are saying (and what Nielson is reporting), you will quickly understand that having DK in their pocket, on the go, and to be able to easily read articles anywhere helps DK move 1 big step closer to his audience. At currently 10,000 paying subscribers (signed up in just 9 months) it’s hard to argue with his success.

The apps are a big benefit to his readers and lets DK quickly and conveniently reach out to them on a device that is usually with them all the time.